A few years ago, I took to a stage (thats me on the left holding the microphone) with some of the cast and crew of an upcoming short film ‘Dead Air’ at the scifi wales convention and asked Geoff (the director), Peter (the writer), Charlie (one of the cast), and Andrew (the puppet coordinator) to tell me more about the short film they were making.  That was in 2017 and this morning I sat down to watch what treats they had been creating (along with the other cast and crew of the film)

Dead Air was and is such a fun movie, a beautiful love letter (I feel) to 80s classics such as Critters and Gremlins and films that followed on such as Tremors in the 90s.Written by Peter Hearn (Scrawl, Cross-Eyed Waltz) The 16 minute film begins with a lovely animated credit and intro sequence which instantly shows you that the team behind this film arent taking any short cuts and cutting to the chase and are giving us the viewers everything they can give. We are introduced to the smash hit punk band Monster Kitten who are headed to the final gig of their tour in a jet plane. We meet The Drummer (played by Stacey Hart ), The Singer (played by Charlie Bond), The Guitarist (played by Johanna Stanton), The Bassist (played by Kate Davies-Speak) and their manager (played by Dan Palmer) as they relax in their own ways at 30,000 feet.

However not all is typical rock and roll as we soon learn, as the air crew (played by David Schaal and James Hamer Morton) have onboard….something…..hidden in the cargo section. All will be revealed when one of the band leaves their seat when they should be remaining in it.

Dead Air is so much fun and with the only downside being its a 16 minute short, rather than a feature length film (but thats not a fault, its just my desire to have spent more time with this film). The upsides are aplenty. The film looks far more expensive than Im sure it was and whilst I never quiz a filmmaker on what a film costs, I do know that this wasnt a multi million budgeted film and that several years of work have gone into created the Dead Air short film. With fully practical creature effects (brilliantly done by Andrew Spooner and his team) the creatures (who are affectionately known as ‘Dave’s’ offscreen looks both cute, and dangerous in the same way the mogwai’s did in the Joe Dante classics or the Crites did in the Critters franchise. Whilst nowadays most films might head for the CGI route when it comes to effects, Dead Air has gone practical and it not only shows, but it works a thousand times better than any CG character that is on film Wonderful work, but with Andrew having worked on Muppets Treasure Island and The Furchester Hotel, he would definitely be one of the go to guys when it comes to practical puppet work. 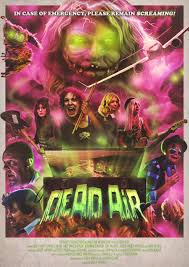 Monster Kitten are also wonderful and whether separately or together,they rock!. I cant help wondering how cool it would be to see them perform a full gig (I wonder if this happened at the wrap party….i genuinely hope they did have a wrap party) . Each band member has their own character style and clothing style and no detail has been left blank in the short time that this film runs.  I want more! But thats the greedy film part of me. If this is what director Geoff Harmer and his team have done with a smallish budget then please someone give them a larger budget so we can get Dead Air the feature length movie, or as Id like to call it ‘Daves On A Plane’.