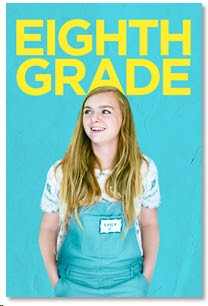 Experience the unexpected humour, heartbreak, and triumph of one young girl’s journey through modern adolescence in the award-winning comedy EIGHTH GRADE and one of my favourite films of recent years which is available on Digital Download on September 9* and on  Blu-Ray™ September 23** from Sony Pictures Home Entertainment. Written and directed by breakout filmmaker Bo Burnham (The Big Sick, TV’s “Zach Stone Is Gonna Be Famous”) and produced by Oscar® winner Scott Rudin (Lady Bird, The Social Network), this internationally celebrated coming-of-age movie stars Elsie Fisher (McFarland, USA, Despicable Me) and Josh Hamilton (Netflix’s “13 Reasons Why,” Manchester by the Sea) in the hilarious and moving story of Kayla, a thirteen-year-old girl making her way through her last week of middle school.