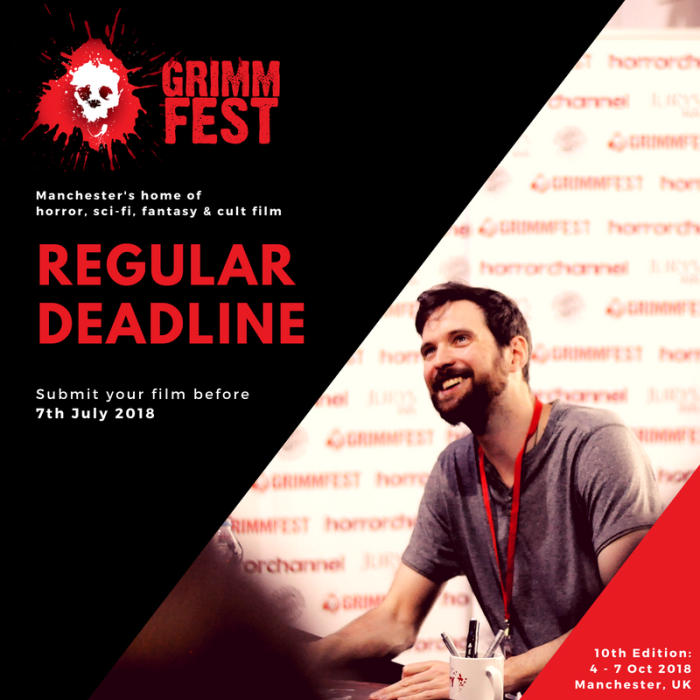 The main submissions deadline is 7th July so you only have a few days left to get involved.  Cant make that deadline? Thats okay Grimmfest WILL accept late submissions until early August but the fees for filmmakers to submit their work will be a bit hgher after this date, so there’s a definite benefit to them getting their submissions in now.

I will be submitting Mimi: a short film to next years Grimmfest, however at the moment, the film sits here with me in script form and isnt ready to begin shooting until late August, mid September, but being a fan of Grimmfest, I am super excited about knowing that come Grimmfest 2019, I will be taking the next step from shooting a film, to having that film seen by the team in Manchester.

GRIMMFEST 2018 is a very special year. it’s their 10th Anniversary!

GRIMMFEST is a truly independent genre film festival, committed and dedicated to sharing great movies from both new and established filmmakers from the world of genre cinema. We pride ourselves on premiering the very best in new horror, cult, extreme fantasy and sci-fi movies.

Submit now to GRIMMFEST and be a part of one of the most vibrant genre film festivals in the world.

“It has been an honour and thrill to watch Grimmfest grow over the past decade into such a powerhouse film festival… the UK is lucky indeed to have such a great fest in its own back yard.” – Dread Central

“Fast becoming one of the most prominent genre festivals in the UK, attracting premieres, special guests and plenty of media attention.” – Bloody-Disgusting.com

“Firmly established as my favourite movie festival to visit.” – 60 Minutes With

“We had a great reception from a wonderfully enthusiastic crowd of genre fans. Can’t wait to visit Grimmfest again.” – Paul Hyett, Director – Howl & The Seasoning House; SFX – The Woman in Black, The Descent

“Grimmfest is bringing some of the best new genre cinema from around the world and you’re gonna wanna check it out.” – Jonathan Hatfull, Sci-Fi Now

“There’s something for everyone at Grimmfest and each and every year the team excel to bring the audience what they want to see and give them a fantastic experience.” – Horror Cult Films

“Grimmfest really seems to be establishing itself as a prime contender in the world of the Horror Festival.” – Diabolique

“I loved everything about Grimmfest. I very much look forward to screening another film there.” – Matt Stuertz, Director – Tonight She Comes, RWD

“I applaud the programmers at Grimmfest for their bold film selections, which not only create unique opportunities for moviemakers but allow their audiences to see and feel cinema they might not have the chance to experience.” – Ted Geoghegan, Director – Mohawk, We Are Still Here

“This has been a massive, massive honour.” – Corin Hardy, Director – The Nun

“We were honoured to have our UK premiere at Grimmfest.” – Bill Watterson, director – Dave Made A Maze

“Easily one of the best experiences I’ve had at a festival.” – Elliot James Langridge, Actor – Habit, Northern Soul

“I’ve attended film premiere’s before but I’ve never felt such a warm atmosphere or watched cast and crew members be so well looked after, myself included”. – Sara Dee, Actress (Borley Rectory)

To celebrate the 10th anniversary of GRIMMFEST, they are proud to announce the first GRIMMFEST AWARDS, a new scheme to celebrate the very best genre titles selected for the annual festival and the creative teams behind them. Selected films will be eligible for award consideration.

GRIMMFEST will also be partnering with HORROR CHANNEL to present a “Lifetime Achievement Award” to honour a very special guest on their body of work within genre film. The recipient will be announced over the coming weeks.

This year’s awards jury has been selected to offer a rebuff to the widespread misconception that Horror and Sci-Fi are male-centric! The all woman Jury includes a selection of some of the brightest lights in Genre cinema right now, including Joanne Mitchell (Writer, Actress and Producer), Caroline Couret-Delegue (Film sales), Lauren Ashley Carter (Actress and Writer), Andrea Subissati (Executive editor at Rue Morgue), Annick Mahnert (Acquisitions Consultant, Festival Programmer and Producer) and Anya Stanley (Journalist at Dread Central).