Starting off like a ‘fast and furious’ franchise entry with slo mo camera footage of girating sun tanned swim suit wearing bodies, and a pumping soundtrack, we (the viewer ) are then quickly introduced to Antonio (played by Seb Castang) who is not only tied to a chair, but has gaffer tape around his mouth. What will happen to him and what will happen to the rest of the cast of Ibiza Undead, the latest film by writer/director Andy Edwards. The cast includes great talent such as Cara Theobold (Downton Abbey),   Emily Atack (The Inbetweeners),  Algina Lipskis (Telling Lies),  Jordan Coulson (Cradle To Grave) ,Ed Kear (Devils Tower),,Marcia Do Vales (The Tombs:Rise Of The Damned)  and Matt King (peep Show) to name a few of the talented souls who appear in front of the camera.

Whilst the title and the cover art kinda of gives us the rundown of this 96 minute feature there is still a ton of fun to be had in discovering just what the hell is happening on this Spanish island. Set after a zombie viral outbreak at a time when the people who arent suffering from the slight undead-ness are pretty much used to the fact that the dead are walking and read all the correct leaflets and follow recommend travel advice, The film focuses on a small group of friends that travel to the party isle in search of sand, sea, and well yes of course you know the rest. Whatever you expect from a film entitled Ibiza Undead, you most certainly get.  The cast are glorious and the film set must been such a fun place to hang out.  I can imagine after a hard days filming, the times away from the camera were a breathe of fresh air for the cast and crew. Ibiza Undead has a wonderful fun feel to it, not taking itself too seriously and as zombie films go this is more a Shaun Of The Dead, Cockneys V Zombies genre entry than 28 Days Later or Zack Snyders Dawn Of The Dead, add to that a feel of TV’s ‘Skins’ and ‘The Inbetweeners’ and you cant go wrong.  I’ve often said that films should either educate, entertain, or do both and whilst the only education I can get from Ibiza Undead is never go to a zombie infected area AT ALL even if its apparently safe. I 100% have to state that Ibiza Undead is a wonderful entertaining film that I will rewatch just as often as I watch Shaun Of The Dead, Cockneys V Zombies, and Army Of Darkness:The Medieval Dead.

So check out this happy, fun loving film and whilst you ll see lots of scenes where the party animals enjoy fun filled times with booze and each other, wait for the moment when the real nightlife kicks off courtesy of the Ibiza Undead.

My huge thanks to the cast and crew of Ibiza Undead (and also to Templeheart Films who are actually one of my favourite UK production houses, there films are always a lot of fun and entertain the hell out of me) 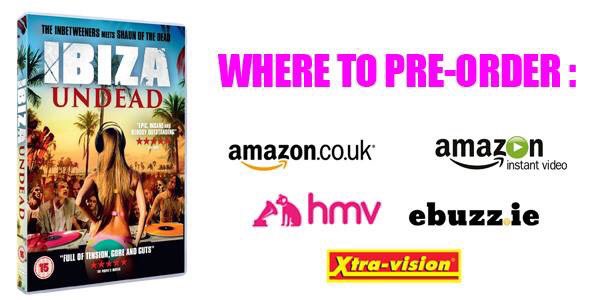