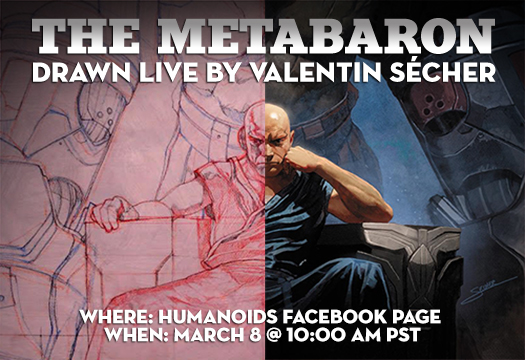 Humanoids will broadcast Valentin Sécher drawing Book 3 of The Metabaron series, Live on our Facebook page.

The Metabarons, the must-read cult spin-off of The Incal, is one of the most iconic and best-selling Sci-Fi graphic novels of all time, created by two comic book masters: Alejandro Jodorowsky and Juan Gimenez. The Metabaron is the latest story cycle following the original series.

Valentin Sécher is, at only 29, one of the most gifted artists of his generation and is already working on his second collaboration with Humanoids. His first work was released in October 2016: The Metabaron Book 1: The Techno-Admiral & The Anti-Baron.

The Humanoids Facebook Live event will stream Sécher drawing an excerpt of the upcoming The Metabaron Book 3: The Meta-Guardianess & The Techno-Baron, a Q&A about his work, inspirations and experiences, followed by questions from the Live audience.